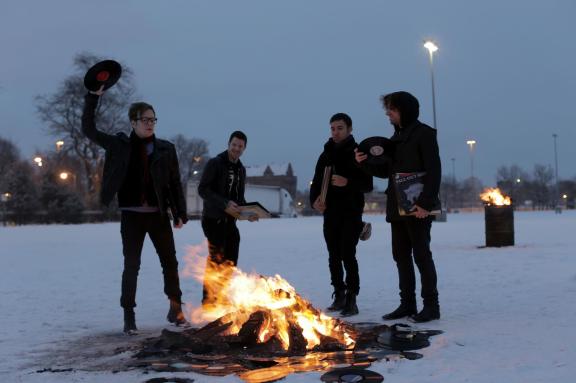 So Fall Out Boy are back. There’s a new album announced ‘Save Rock and Roll’ (a bit of an odd title, considering they’ve never been a rock and roll band – am I missing some irony here?) and a video released for first new single ‘My Songs Know What You Did In The Dark’. For once it seems the internet rumours are coming true.

Solo projects and a certain marriage / breakup with a female popstar aside, this is a band that haven’t had a huge amount of attention for a while. (In fact, a few months ago I found myself wondering whatever happened to them). The band must know that they’ve got to create something amazing to get back what they had.

It definitely sounds like they’re going in the right direction with ‘My Songs Know What You Did In The Dark’. On first listen, the song sounds fairly typical of Fall Out Boy. Catchy hooks, clever lyrics with a bite, good beat. Play it a few more times though, and it starts to sound darker, heavier. There’s more of an electro edge that we haven’t heard in Fall Out Boy’s music before. The vocals sound fiercer too.

There’s no mistaking the message that the band are putting whatever troubled past they might have had behind them. The video consists of rapper 2 Chainz burning the band’s memorabilia. The band’s Facebook page shows them doing the same (anyone else hoping Patrick hasn’t burnt his hat collection? I always liked his hats..).

To the band’s credit, this song does sound like they’re pretty tight. And they mean business.

Make up your own mind:

UK folks, you can catch the band at Camden Underworld on February 25. Tickets go on sale Feb 8 & 9.

3 thoughts on “Single Review: Fall Out Boy ‘My Songs Know What You Did In The Dark’”